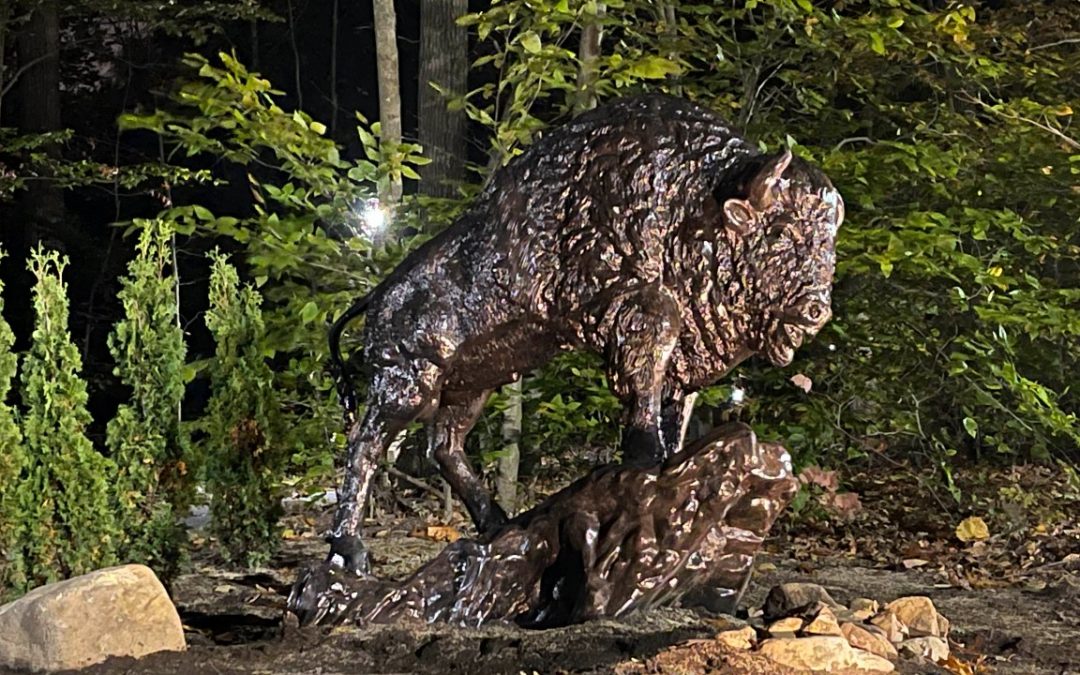 Mountain Lakes, NJ – On a damp, blustery evening in Mountain Lakes, a small crowd gathered at Wilkins Field, just as announcers were conducting sound checks and cheerleaders warmed up for the last regular-season home football game. The lively group of HERD fans, family, and alumni, bundled up in the cool fall weather, were not there at that moment in anticipation of the game, however, or even for “Senior Night,” scheduled to begin 30 minutes before kickoff; though many would remain for both. Instead, they were there to participate in a ceremony that would mark the beginning of a new tradition in HERD Football; the unveiling of the new HERD Buffalo Statue.

Gifted by the HERD Alumni Foundation, the 5’7″ tall statue—featuring a lone American Buffalo standing upon an angled slab of rock—will be a permanent memorial to the late Coach Doug Wilkins. It will forever overlook the field where he led the HERD for more than four decades and which is now named in his honor. The HERD Alumni Foundation purchased the statue with funds raised from memberships to its appropriately-named Buffalo Club. The Buffalo Club is a fundraising initiative in which members receive exclusive HERD-related perks in exchange for their generous recurring monthly donations.

The brief ceremony featured speeches by Coach Darrell Fusco, the HERD Alumni Foundation’s own Jamie Rodgers, and Gordon Wilkins, Doug’s son and a HERD alumnus. Remarks focused on the legacy left by Coach Wilkins, particularly the traditions he helped craft over 40 years as head coach. The ceremony ended with the start of what will be a new tradition. The team, marching to the field for its final home game of the 2021 regular season, passed the statue with each player giving it a touch. For years to come, Herdsmen will carry on this tradition, bringing more of the spirit of the HERD onto the field with them each home game. And with the buffalo’s perpetual gaze upon them, Coach Wilkins will forever keep a watchful eye upon his beloved HERD.

Events like this are made possible by our generous Buffalo Club members! The Buffalo Club is a new and exciting way to support the HERD Alumni Foundation and is designed to give back to our supporters for continuing to believe in the HERD spirit. The concept is simple: in return for a monthly recurring donation, Buffalo Club members receive unique perks, such as exclusive apparel items, members-only access to website content (coming soon), and free or discounted tickets to the annual Alumni Party & Pig Roast. The more you give, the more you get! It’s our way of expressing our appreciation beyond a simple thank you. So please help us make more special events and contributions like the buffalo statue possible by becoming a Buffalo Club member today!

Get rewarded for supporting the HERD!

This site uses Akismet to reduce spam. Learn how your comment data is processed.